Lenses play a central role in photography. For most photographers, lenses make up the bulk of the cost of their equipment. The kind of photographs you want to take decide the lens to use – wide angle or telephoto, macro, wide or narrow aperture and so on. However, the simplest camera – a pinhole camera – has no lens but is equally capable of taking as beautiful photographs as any sophisticated camera. Why is there a vast array of lenses now? To understand that, we’ll have to look in more detail at the humble pinhole camera.

Imagine a barebones pinhole camera as a large box with one side having a tiny hole to let light in. The side opposite it is where the image forms and has a sensor which ‘records’ our image. To capture an image we light the subject up, open the pinhole to cast its image on the sensor and cover the pinhole.

If our subject isn’t well lit, then we need to ‘expose’ it for longer – keep the pinhole open for longer – to get a bright image. The longer we expose the subject, more the light that enters through the pinhole; this means the image is brighter. But more times than not, this isn’t feasible – the subject is not always inanimate. So, let us go the other direction and increase the exposure – we’ll make the pinhole bigger. That will work…right?

Well, it’s not that straightforward. If we make the pinhole too big, we fuzzy up our image. Why? Lets zoom in on the pinhole of our camera and take a closer look:

Upon closer look, each point is fuzzed out in the image

As you can see, a point on the subject actually corresponds to a small fuzzy spot on the image. How smeared this spot is determined by how big the pinhole is. The final image that is formed in a pinhole camera is a composition of an infinity of such spots. The image is inherently fuzzy, its fuzziness decided by how big the individual spots are, which in turn depends on the size of the pinhole. The smaller the pinhole, the the sharper the image.

In a pinhole camera, the quality of the image is a balance of two factors – sharpness vs brightness, both decided by the size of the pinhole. You make it too big, you get a brighter but fuzzier image and if you make it too small, you get a sharper but dimmer image. But we want to have our cake and eat it too…and thats where lenses come in.

A lens is a transparent material shaped precisely such that all light that enters it from points on a plane on one side of it converges at corresponding points on a plane on the other side. These planes are the focal planes of the lens. With a lens, the pinhole can now be made bigger, much bigger without compromising on image sharpness. This pinhole is now called the aperture and what you get is a modern camera. Due to other complexities – image distortion, reflections, zoom capabilities etc. – most modern lens units are themselves built up from several lens elements. Nevertheless, everything that follows is just as applicable to them as they are to a single elementary lens.

Now, having a lens brings some complexity to the image composition process. Three properties inherent to a lens are:

The focal length of a lens is a measure of how far behind it lies the focal plane i.e. how far behind the lens is the image formed. A lens which has a focal length of 300mm is one which forms its image 300mm behind it. In such a lens the angle that two rays of light subtend at the focal plane is narrow. Put another way, the field of view of the lens is very tight – such a lens is great for capturing images of subjects which are far away from the lens. Lens modules which have a focal length that’s more than their physical length are called telephoto lenses. At the other of the range take a 18mm lens, the angle that light rays subtend is much more obtuse. This is a wide angle lens, and is great for capturing landscapes.

The focal length is also an important consideration for perspective. How is that? Suppose that the subject is some distance away and you use a long lens, a 80mm lens to shoot it. With this lens, the subject fills up half your frame. Now you can use a wider lens, a 35mm one, to shoot the same subject but from much closer so that it still fills up half the frame. Although in both final images the subject will be the same size, in the photograph taken with the wide lens you’ll see a lot of the background as compared to the photograph taken with the longer lens. This photograph from the 80mm lens, will look a lot tighter, as though the subject is up against the background. Perspective in composition is a very powerful tool. Check out this website for some great examples.

The aperture, like alluded to earlier, is the opening through which light enters the camera. Instead of measuring the aperture by the diameter of the opening, we use the so called f-number, say f/2.8 or f/8. This is a useful unit because it is independent of the focal length of the lens. So two lens with different focal lengths, but with the same f-number let in the same amount of light. Refer to this earlier post for more.

The aperture affects the depth of field(DOF). The DOF is a measure of how quickly the focus falls off in front off or behind the focal plane i.e the sensor. A wider aperture gives a shallower DOF while a narrower aperture gives a greater DOF. Why is that? 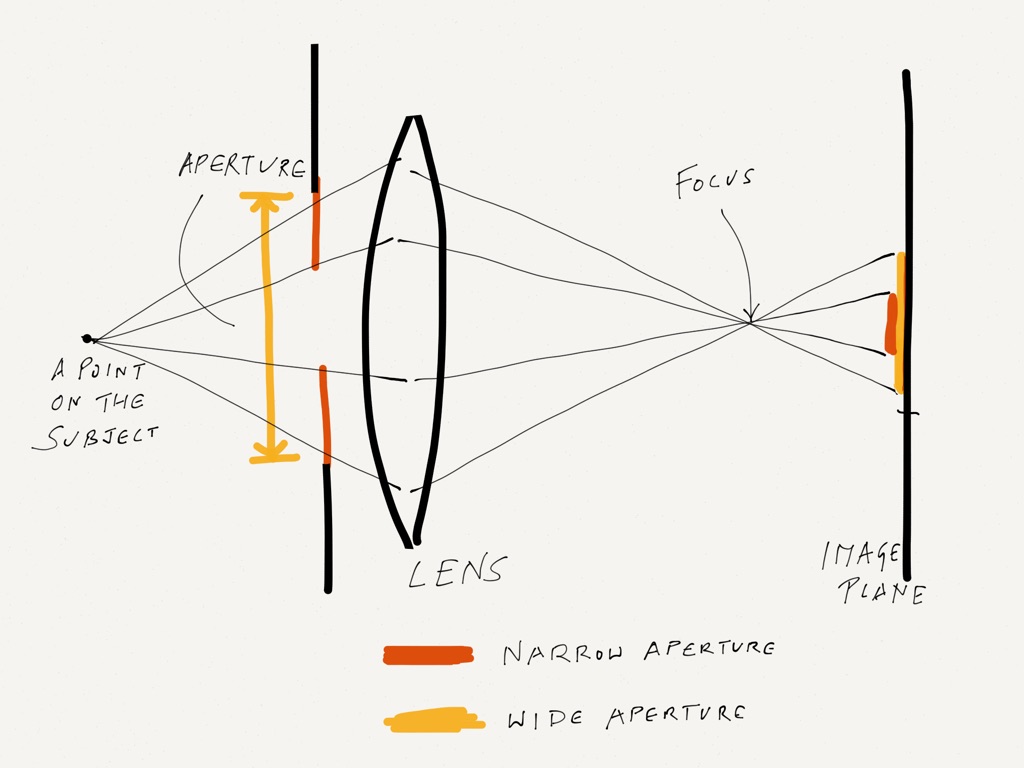 Depth of field is affected by aperture

A wider aperture imposes a greater penalty on missed focus than a narrower aperture. This translates itself into a shallow or a wide DOF.

The minimum focussing distance(MFD) of a lens talks about how close it can be to the subject and still form a sharp focussed image of it. Most ‘standard’ lenses have MFDs of around 1-1.5m. There are lenses, called macro lenses, where the MFD is much lower around 20-25cm. Such lenses are perfect for photographing tiny subjects which you can get very close to. With macro lenses another criteria – the reproduction ratio or the magnification – becomes important, which is usually around 1:1 (at the high end) to 1:0.25 (at the low end). It is a measure of the size of the subject to the size of its image on the sensor. So if a macro lens is designed to have a ratio of 1:0.5, it means that a subject 1cm across will cast an image 0.5cm across on the cameras sensor.

While 1:1 doesn’t sound an impressive ‘magnification’, if you think, it’s actually very good. Lets say you have a 16MP camera with a APS-C sized sensor. Such a sensor is roughly 25mmx16mm in size, or 400mm². If you shoot a tiny insect 1cmx1cm with such a setup, then the insects image will roughly 25% of the sensors size, or in pixel terms, 4MP. Thats an incredible amount of detail for something that small!

I hope you understand lenses better now – why aperture works the way it does, why wide lenses work for landscapes and more. Sometimes it is useful know the WHYs of photography too. Happy shooting.