Bahubali released to theatres a week ago, on 10th July. The films marketers claimed this to be the biggest Indian movie to date – in terms of cost, in terms of distribution and in terms of scale. Movie critics waxed eloquent about its epicness, its visual effects, how it is the perfect blockbuster and more. The movie scores 9.4 on IMDB – more than each of The Lord of the Rings trilogy , movies whose scope Bahubali seems to be inspired by. 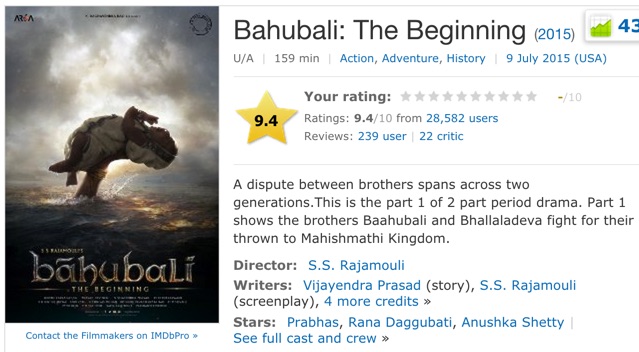 I too got caught in the movies hyped awesomeness and, boy, what a dud it turned out to be.

That Bahubali is ‘touted to be’, ‘reportedly’ the most expensive Indian film to date has been spread far and wide. But why hedge claims? Doesn’t anybody know? Is it too difficult to ascertain? Oh well, its probably the movies’ marketing department at work. Nevertheless, the money, however much, wasn’t wisely spent. The film is simply overhyped.

As I was watching Bahubali, I couldn’t help draw parallels with Amish Tripathy’s Immortals of Meluha, a book I had a less than charitable opinion of. Both are exercises in mediocrity 1. Similar settings, similar characterisations, equally hammy dialogues, similar storyline arcs.

Bahubali plays out in the fake-mythic ancient city of Mahishmati, the Immortals of Meluha has titular Meluha for its setting. Both works have similar characters – Shiva in the movie is a stand-in for the Shiva of the book, Avantika is Bahubali’s Parvati while Katappa is Parvateshvar.

Whether through aggressive editing or simply poor screenplay-writing, the actions and emotional responses of Shiva, Avantika (and others) are at odds with their character. Shiva goes from being a silly village bum to knowing he’s the crown prince in waiting just as quickly as Shiva in the Meluha trilogy does. Avantika sheds her Amazon warrior princess clothing to a hapless, weak in the knees teenager with a severe bout of cupiditis all because a muscled guy climbs over a waterfall for her. Sigh…

Traditionally, movies coming out in India (more so in South India) have an aversion towards understatement, restraint in all aspects of film-making. Bahubali epitomises this. Everything is amped up. Palaces so big and ceilings so high that everyone looks a Lilliputian in Gullivers house. Truer, conversational dialogues take a break, louder punchlines are centerstage. Melodrama is the name of the game – one character spends decades collecting twigs, falling on a giant courtyard absent of trees, for a funeral pyre to light up the antagonist in! Characters are either saintly or pure evil, no one is real. When movies started a century ago, the hero would consider himself lucky if he managed to land a punch on a baddie. Now, the protagonist of Bahubali takes on armies. Heck, a central character takes a lawn mower to battle and leaves behind the smell of freshly cut grass wafting from the battlefield.

All reviews highlight Bahubali’s special effects. I’ve appreciated mediocre movies only for their CGI – The Matrix Reloaded, Avatar come to mind. But Bahubali disappoints here too – VFX are quite mediocre. Verisimilitude is absent. Its easy to tell what is CGI and what isn’t. The waterfalls, the entire city of Mashimati, the entirety of the war sequence towards the end are literally as good as a game running on a high-end computer. At no point do they seem life-like – this ain’t no Lord of the Rings. Sometimes, a shimmering halo outlines characters, a dead give away that they are in front of a green screen. Some other times, while a character moves smoothly across the screen, the background looks pixellated and choppy – yet another shabby job. These are the highs in the movie’s CGI. The lows? Fake butterflies, the avalanche sequence. They were just bad.

I feel conned. The hype surrounding the movie hurt it for me. Interestingly, I didn’t come across any negative reviews of the movie online. I wonder whether critics appreciate movies like this – if they do, they aren’t critics? Or is that they just cant call it as they see it? Both are scary possibilities.

When you look closely, the title of the movie is ‘Bahubali – The Beginning’. Arghh! No wonder then that the movie ends with the tale unfinished. ‘Bahubali – The Conclusion’ hits screens some time in 2016 for a second round of mediocrity. The joke is on us.

4 thoughts on “Bahubali – A Review”